Character Sketches – Out Of The Garden

This year, I have been attending a college course in web design. This term, we were asked to come up with a website design for a fictitious client: A toy store named “Out Of The Garden Toys”.

In addition to the benefits of going through the process of budgeting & project management, the really fun part of this exercise has been in coming up with some kid-friendly designs and characters. So I thought I’d share some of my sketches with you, and give an idea of the thought processes behind it.

Basically, I wanted a boy character and a girl character – a fairy and a garden gnome – two magical characters traditionally found at the bottom of one’s garden. The fairy was easy enough to arrive at; Lots of little girls love fairies, plus I gave her a tiara, which makes her a fairy princess – two girly fantasies rolled into one! But the gnome was more difficult. Boys don’t identify so readily with magical creatures, plus the beard meant the character couldn’t relate to their age level. Dropping the beard made him younger, but also made him look more like an elf. I made his hat taller so it would show something of his gnomey origins, but I think, in the end, I can live with him being an elf.

These were drawn with biro on paper, because, in the classroom, it was all I had to work with at the time. But, just as with the card envelope designs, there is something to be said for sketching with biro as opposed to pencil. With pencils, I tend to play it safe, because I can rub out & correct as I go. But the biro gives no opportunity to correct mistakes, and so I find it actually encourages a kind of recklessness. To not be afraid of what comes out, and to continue forward, because you can’t go back. As a result, I tend to draw more freely and loosely.

I would be interested to hear your thoughts. I’m kinda gravitating to the designs on the right hand side. 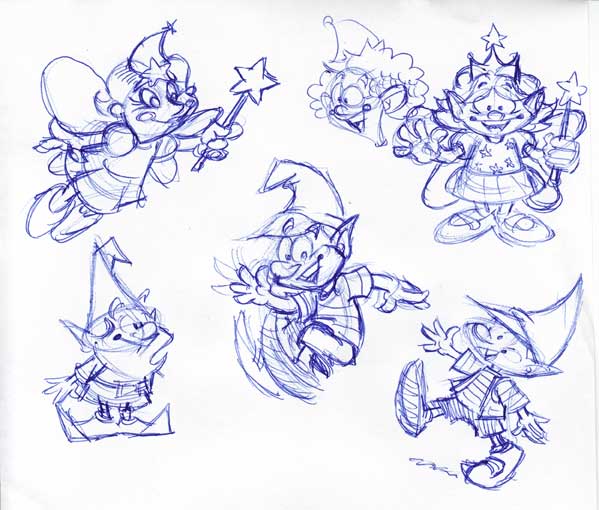 Out Of The Garden Character Roughs