I have recently been in the process of reexamining my digital drawing workflow. Ever since I purchased an honest-to-gosh Wacom Intuos graphics tablet five years ago (still one of the best gadget investments I’ve made!), I’ve been basically going about things the same way: hand-drawn pencil sketches scanned in, then Corel Painter X for inks, and Adobe Photoshop and/or Illustrator for colours, depending on the situation.

Now Corel Painter X is getting long in the tooth, and I’ve been asking myself the question: What software tool(s) should I replace it with? There have been some schools of thought that say both inks and colours should be done in Illustrator, given its inherent advantages. On the other hand, there are still other digital artists that swear by a particular program called Manga Studio.

So recently, while it was on sale, I took the opportunity to download a copy of Manga Studio. I had heard of it for a long time but I never quite took the plunge until now. Basically, if you can imagine Photoshop, but with specialist comic tools built into it, you’ve got Manga Studio in a nutshell. It uses most of the same shortcuts & things as Photoshop, so I had no problem there. However, it took me a couple of (rather helpful) tutorial videos to get the hang of where to find & how to use the comic tools. 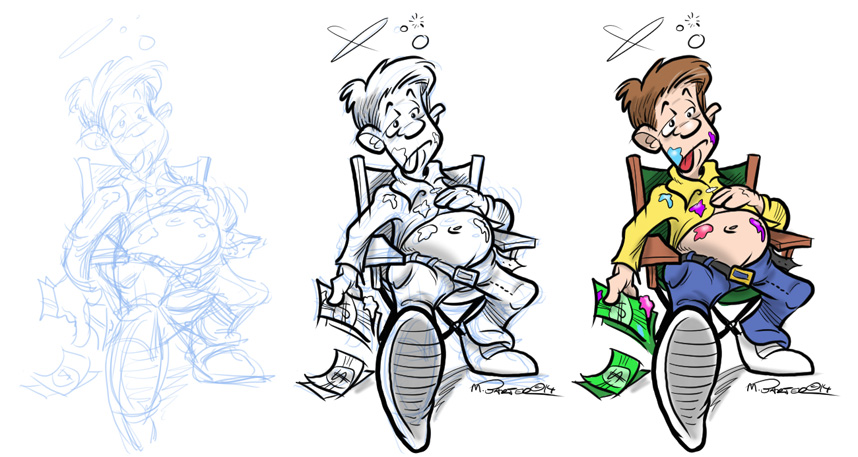 Above are the results of my experimentations, and I have to say: So far, so good! I am loving the ink pens, they feel very natural and look very clean. For kicks, I even tried foregoing the hand-drawn scan, and sketching directly in Manga Studio. I’m still going to try getting the hang of inking with Illustrator, as it has advantages that Manga Studio doesn’t, but Manga by far feels more natural to me, and I reckon I’ll be gravitating more to that side of the fence.

[A RATHER LONG ASIDE: If you take the time to look closely at the screenshot in the heading, you’ll notice the program is called ‘CLIP STUDIO PAINT’. What gives? Apparently, the Japanese studio that created the program and the US firm that distributes the program in English-speaking countries call the same thing by different names.

Some trademark & distribution politics come into play here, and I don’t even pretend to understand any of it, suffice to say ‘Clip Studio Paint’ is what Japan calls it, ‘Manga Studio’ is what America calls it…. Personally I think I prefer ‘Manga Studio’ – at least that tells me what the program does.]